{Problem: Everything works on the Mac except the battery doesn't charge, and there is no light on the MagSafe2 to indicate status. The system is being powered by the adapter. It says power source: power adapter. It also says Battery not charging.}

I installed a replacement battery from ifixit for my mbp 15” early 2013 and the install went fine, everything works… except… the battery won’t charge. It arrived with 70% and even with the power adapter connected it has slowly run down to 1%. I have tried to reset the SMC, the PRAM/NVRam, I have rebooted, I have disconnected and reconnected the power adapter from the outlet and the computer. I have disconnected and reconnected the battery. I have checked that all the internal cables are seated properly.

I ran ASD and it failed test #51 “Checks to see if the Battery is using the programmed ATV Table. Error message:

Error -26 [Programmed charge Table Not in Use] TEST FAILED

IFixit don’t seem to have any interest in engaging with the problem, no real technical support, they did offer a refund fairly swiftly, but weren’t interested in investigating. 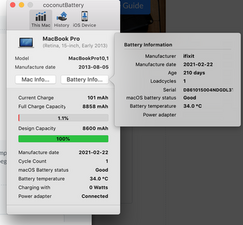 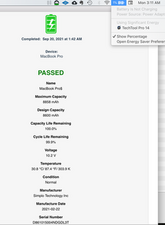 As you can see it sees the battery it says it’s ‘good’, has 1 cycle, but won’t charge even with the power adapter attached.

The magsafe2 although running the computer doesn’t light up btw. I have disconnected and reconnected the power supply from the outlet and the computer. 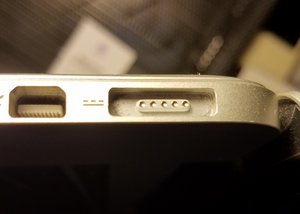 I'm suspecting your battery has an issue but need a bit more to tell.

Thanks Dan, snapshots below. Impressive resume you've got there!! :)

@batterymacs - I started out fixing IBM PC's, yup the original PC! Then Compaq and Apple II & HP systems so I've been around awhile ;-}

I'm retired now and focus my efforts on the Mac systems.

Wow! Quite a history! Any idea what the deal is with this battery? ATV Tables? Or you think it's just a screwy circuit on the battery maybe?

You will install this Board on you system.. This is better and good for use..

Not good ;-{ The logic board comparator logic is damaged. You likely killed it with a knockoff charger, here’s a great explanation How cheap eBay batteries DESTROY Macbook logic boards! This is a comparator measuring the voltages and it’s damaged.

@batterymacs - Did you follow proper ESD practices, or damage the logic board somehow? Was the system liquid damaged?

Without physically seeing the system I can only guess the cause.

I was super super careful followed all instructions to the t, very gentle with all components, especially with all the connections. No liquid damage ever.

I could take a picture of the inside and post it if that would help?

@batterymacs - Sorry not likely to help. This is a circuit level issue. You'll need to find someone with the deeper systems to diagnose things locally.

Understood. Do you think it's worth me going through the process again, taking everything apart and reassembling... just in case?

What I would do to figure out if it is the battery or the board is disconnect the battery then plug it in to see if it will boot up if it does its the battery
if no power comes on it could be the charging port, charger, or motherboard

I don't follow, I think you've misunderstood the problem.

Make sure the middle pin of the MagSafe connectors are making a good contact as that’s the one wire comm between the system and charger Teardown and exploration of Apple's Magsafe connector. 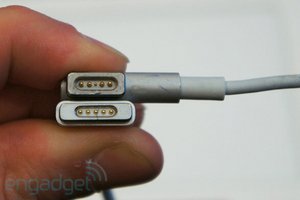 Also make sure the insulator area is clean! As junk can prevent good mating as well. 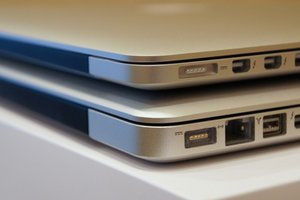 One of the causes of damage is knockoff chargers as unlike a real Apple unit they have poorly designed logic so they spark! Lacking safety features, cheap MacBook chargers create big sparks This arcing over time damages the pins and often can jump to the middle pin damaging the logic board!

Now the fun part I have two chargers on my desk both look exactly! the same!! Which is the real one and which is the knockoff ??? You just can’t tell. The only way is to weigh them the lighter one is the knockoff but that assumes you have one of each and are the same series.

One of the companies I had worked at had a very expensive encounter with a knockoff charger! It cost them well over 3 million! One of their engineers forgot his charger at home as he had an important meeting the next day he found his way to a local computer shop to pickup a charger no big deal, was he so wrong! He went back to the hotel he was staying, plugged his system in and went to dinner. When he got back to the hotel the building was evacuated as smoke was billowing out the windows. Sadly the investigator identified the fire started in his room! The charger started the fire. After a few years of litigation it was a very expensive charger! The store which sold the charger also was sued as well and they folded up from cost of their litigation.

So make sure you only buy a REAL Apple charger directly from Apple Apple 85W MagSafe 2 Power Adapter (for MacBook Pro with Retina display), don’t trust Amazon or eBay listings as they are not selling real Apple units no matter what they say!

Magsafe2 looks to be clean. DEFINITELY not a knockoff charger. It came from Apple and i unwrapped it myself. Also was working perfectly for a long time before battery swap.

@batterymacs - So that drives us back to the logic board ;-{

You'll need to pull the logic board and inspect the back side where the comparator logic is located. The VLS chip maybe bad (review Louis' vid)

It was not the logic board.