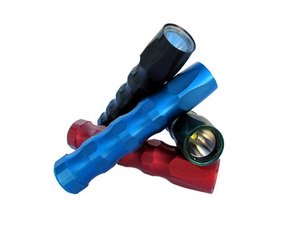 HexBright is the open source flashlight, programmable and powerful.

What can a Hexbright flashlight be programed to do?

Who has done what with it so far? I have no idea how its set up but off the top of my head I came up with a few possible uses; sleep timer, battery life/ energy saving script, SOS beacon. I guess if a person had two units, they could replicate the CERN project with more favorable results? In all seriousness what did they have in mind here?

Here’s something you don’t see every day: a programmable flashlight!

Through some NASA lunar excavator connections (no joke) we made friends with Christian Carlberg, the creator of absolutely smashing Kickstarter project. Before building moon-dirt-digging robots with us, Christian was a Battle Bots contestant for several years. When we found out about his latest project, we offered to let him work out of our office while he worked to get it off the ground. He’s hanging out with us for last few months, and it’s been exciting to watch his bright little idea grow into one of the top-grossing Kickstarter projects of all time—he has over $172,000 in pre-orders right now, and there’s still 5 days left!

The HexBright Flex is a programmable flashlight that you can program however you’d like. Each HexBright Flex has a microUSB port within its aluminum body. Just twist off the cap and plug in a USB cable; the rest is up to your imagination. You can have simple ON/OFF functionality, ON/ON MAX (max brightness)/OFF, ON/FLASH TWICE/OFF, etc. — basically, whatever you can think of.

The coolest implementation we’ve heard of so far: a pilot has written a program to make the Flex to flash his call sign in Morse code. He’s planning on attaching it to the back of his wing for other pilots to see. There are thousands of possibilities, so feel free to give your best suggestion in the comments below.

Other neato features of the flashlight include:

A rechargeable lithium-ion battery. No need to buy or replace batteries, just plug your HexBright Flex into any USB port. The battery is easily user-replaceable, which as you well know is an absolute must for iFixit endorsement of any product.

An easily programmable Atmel ATmega IC processor. Development tools are available for all platforms (PC/Mac/Linux).A waterproof body constructed of a single chunk of hex-shaped aluminum.A sealed rubber switch on the back of the flashlight that controls the microprocessor — not just a simple disconnect switch.

An open-source tool to program the flashlight however you want.

The software may be open source, but he better patent the design or it will be instantly copied.