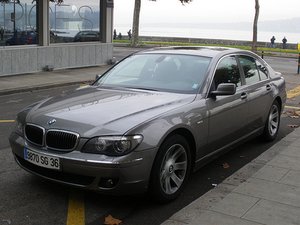 The BMW 7 Series is a full-size luxury sedan manufactured by BMW since 1977. BMW (Bayerische Motoren Werke AG) is a German international automaker of luxury vehicles and motorcycles. The 7 Series is BMW’s flagship car and has only been produced in a sedan body style, including long wheelbase and limousine models.

The BMW E65/E66/E67/E68 is the fourth generation of the BMW 7 Series and was manufactured between 2001 (for the 2002 model year) and 2008. The E65 model represents the BMW 7 Series sedan, E66 represents the long-wheelbase sedan, E67 indicates the armored car sedan (marketed as High Security 7 Series), and E68 specifies the hydrogen-powered sedan (marketed as Hydrogen 7). All 7 Series models are 4-door sedan vehicles with rear-wheel drive layouts and classify as full-size luxury cars.

The E65 7 Series model was the first BMW automobile to include the iDrive infotainment system, active anti-roll bars, 6-speed automatic transmission, electronic smart key, and night vision. The E65 model replaced the traditional console-mounted gear selector with a steering-column mounted stalk in favor of two cup holders. The emergency-brake is controlled using a button located on the dashboard, and the seat adjustment controls were moved to the inside of the raised central console from their traditional place on the side of the seat base. Also, the vehicle’s center instrument panel is not angled towards the driver.

The BMW emblem is generally located in the center of their vehicle’s front end. The emblem includes the letters “BMW” in a black circle surrounding an inner circle made from two white and two blue triangles with the same-colored shape opposite to each other. X7 models do not generally include any model names or other emblems on the rear of the vehicles, unlike many other cars and trucks.