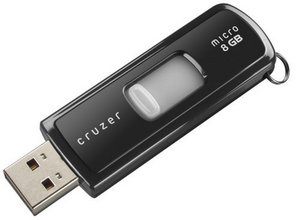 USB flash drives serve as a popular way to store digital information as they are small in size, portable, and durable. USB stands for Universal Serial Bus and USB flash drives can be connected to a USB port. They provide a set amount of storage space and can be used with devices found in homes, workplaces, and schools. Examples of these devices include but are not limited to: computers, DVD players, video game consoles, music players, and digital picture frames. USB flash drives use flash memory, a type of computer chip, hence the name “flash drive”. Other common names for USB flash drives include pen drive, thumbdrive, or just USB.

USB flash drives are usually used for short term data storage because flash memory has a limited life. Users should keep in mind that data can only be written to and read from a device a few thousand times. Other than traditional data storage, USB flash drives have also been used for scanning viruses on computers, holding evidence for the cyber division of the police, and holding gaming information such as high scores and screenshots.