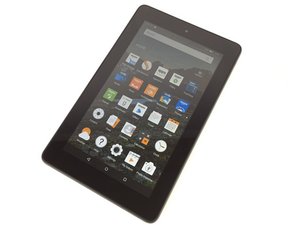 Where do I get a new battery?

I have a Kindle Fire 7 (SV98LN) fifth generation, opened it up and found that it has a battery with model MC-308594. I'm having the issue where it shuts off when between 74% and 94% of power. I want to get a replacement but only found two on EBay, and none on Amazon. I can find batteries for almost any other device. So where do I get a replacement battery? Or is it that Amazon would rather I just buy a new Kindle?

I have found a website that has the MC-308594 battery for the kindle fire 5th gen for $14.25 The website is BIGUPGADGETS.com . The batteries you get on eBay are used , this one is new with a 1 year warranty.

Do a search on eBay for "sv98ln battery" and you will find many choices now. There must be a bigger demand as these Kindled get older. ..

Bigupgadgets no longer sells this battery. The battery clerck does though for 19.95

Here's how to replace it:

Sorry, but this is the same issue I had researching this in the first place. I don't have an HDX. I've already popped my Kindle open to get the model number of the battery itself...

Of course as I am typing my response on my Kindle, the prior link is sent... But no mention of where to get one. I'm having a hard time finding new ones.

Oops - prior should be proper. Can I blame that on auto-spellcheck?

jayeyeemm take a look on here and see if that will work. Call those places dfor more information if needed. Always good to talk to someone. Or is it that Amazon would rather I just buy a new Kindle? Absolutely yes. That is the reason for existence of ifixit......Here are the directions on how to change it.

Wow... That looks right, but $54? I may as well get a new Kindle at that price, which is what they want me to do anyway. I was only able to find 2 used ones on eBay around $20 each.

I hear you on the price. I am going to continue to check other sources as well and will update my answer as I find a cheaper solution.