Had an issue with my Macbook Pro as posted on another thread which has developed into another issue. Changed my keyboard which was a bad quality version and ended up pulling my battery whilst turned on (under load) and caused the battery to short. Mac wouldn't turn on but only in SMC bypass (holding power button and connecting charger) and only in safe mode (wouldn't fully boot in normal mode). X would display on battery icon top bar. Could not run hardware test as Mac would turn off at the beginning of test.

Replaced my battery but accidentally with an incorrect one which short my charger (o dear what you must be thinking). Brought a new charger from Apple and a cheap battery which got the Mac working to normal boot up, however noticed it would take more than a day to charge to 100% and would drain quickly. Did a hardware test which displayed the following error code -

So purchased a Newertec battery, now Mac turns on and loads up nicely, keyboard all working as replaced with good quality one. Now that I have a good quality battery, it drains as expected but still takes over a day to charge. I ran another hardware test which again produced a battery error code but with a slight difference.

1 - Could anyone tell me what the 'g' and the 'òboâ' indicate and the difference, or is this not anything of any importance or is unknown?

2 - Any idea what the whole code may be indicating fault as (keeping in mind charger is new from Apple and battery is a new top brand from MegaMac).

3 - Also is there anyone who would think the long charging time is defiantly the DC in board?

Was going to test like below with volt meter, however was unsure if voltage test would miss another fault on DC in board - 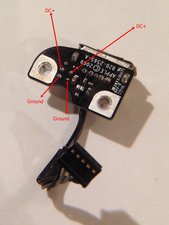 (source from What's wrong with my logic board? )

Apart from the long charging time the MacBook Pro is running absolutely fine as normal. 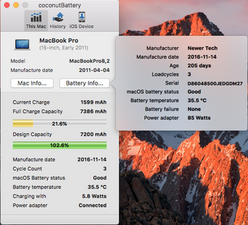 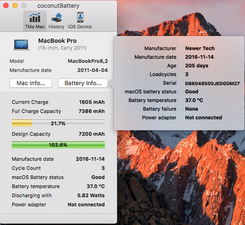 Coconut Battery does at time show charger charging up towards 9-10 watts but this settles at 6 watts.

Thank you in advance

So fast charging or the keyboard backlight hmmmm.

I actually had the laptop just repaired as graphic chip needed repairing. But noticed they had not connected back the backlight. So check with and without backlight.

Will need to take it back to get them to sort it properly.

hope this helps those who do not want to spend on their Mac but want normal charging.

So at the end I required the battery controller chip to be changed which remedied the slow charging issue.

Thank you for your post, anyway to confirm the problem via a test?

Location of the chip please?

I have several of the MacBook Pro (15-inch Early 2011) Intel Core i7-2635QM 2000 MHz (4 cores). I have replaced with a no brand battery and had about the same AHT error. Loading was ok, but I noticed that the machine was a bit slow. EtreCheck show "good" performance. But I ran Geekbench to check CPU in more detail. I had 897 single / 2803 multi. Very unsatisfactory. Because when using the orginal A1382 from Apple the CPU goes with 2460 single / 7971 multi. With this no brand I lost about 66% of the performance. If you look into Geekbench with "MacBook Pro 15 2011" you find plenty of such performance differences. I believe that the low findings correspond with no name batteries.

It should charge at least at 20W from what i've seen so far you have a problem with the charging circuit on your motherboard. 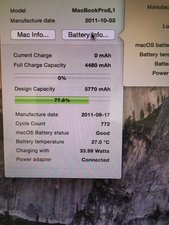 Since is still charging there is a low probability that the SMC is fried so the most probable cause of your issue is the Q7055 Gate that is not doing the right job or the U7000 but my bet is on the Q7055. (here I supposed that your motherboard number is 820 2915, they are almost the same all of the 15" from the same year) 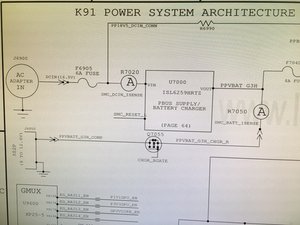 You should look for a shop near you that is doing this type of micro soldering repairs.

Just to be sure, did you try a SMC Reset?

So fast charging or the keyboard backlight hmmmm.

I actually had the laptop just repaired as graphic chip needed repairing. But noticed they had not connected back the backlight. So check with and without backlight.

Will need to take it back to get them to sort it properly.

hope this helps those who do not want to spend on their Mac but want normal charging.