I had to remove all the heat sinks and thermal paste from my 2011 15" MBP, and found that the compound on the PCH forms a thick 1mm-ish layer between the chip and the flat heatsink.

When I went to apply new thermal compound, I was using Arctic Silver 5, and realized that the normal minimal application was not nearly enough to fill the gap!

I ended up bending the tabs up a little bit so the metal plate sat much closer to the chip. I have another MBP that I have to do the same thing to, or should I just use a different sort of paste instead?

Edit/Update: It's up and running now, thanks for the K5-pro tip - I really think it made things much simpler! And I will probably use one of the Arctic ceramic pastes next time as suggested. :) Thanks all!

It's the same model of 2011 15" MPB. Basically mine went kaput a year ago, and then my friend's went kaput a few weeks ago, so I baked the motherboard on mine before I attempted it on hers, and mine worked, but I'm concerned about the IO Controller chip and the Thunderbolt chip and them making contact with the flat metal heat sinks correctly. : / A few people in other places used copper sheets to fill in the gap, but I was wondering if there was another option.

The layer of paste applied at the factory was so thick that a dust bunny was sitting in between the plate and the chip just kinda stuck to the edge of the layer of thermal compound. On the first MBP the compound on these 2 chips was very dried out and crumbly, but on this one it is still a little bit "wet" in places.

First baking a board is one of the worst ways to repair a GPU, it's hit or miss at best. Next, it sounds like the first machine had defects. Each machine needs to be jointly fitted together with the new thermal paste and then see if you have contact.

You'll need either a special gapping paste or pads.

Arctic Silver is only suitable for heatsinks that touch smoothly. Altering the heatsink to change the gap is not wise! As your alteration can effect the alignment & pressure on the chip causing more problems.

Thanks. Well my options were baking or trash can. And yes, there were tons of defective MB pros from that time - they overheat like crazy and the gpu detaches from the board - and they had a free repair/replacement program that ended the first of this year, and now Apple won't do any work at all on this model because it's "too old." So just doing what I can do. And both of them have the same large gap, the first one was just used for a lot of League of Legends. :D

Thanks Dan, I found a few more people who dealt with the same thing with this chip and used copper shims. I know I probably won't have to open it up again, but if I do... I read some horror stories about fusing the heat sink to the chip... Would thermal pads still be a better option than some sort of copper? Or would that only really be a problem with the gpu/cpu?

And yeah, that's what I was afraid of with the height adjustment. :( I'll just go back and put the tabs straight again.

Sarah, This 13" series only has the integrated GPU (HD Graphics 3000). It was the 15" series that had the troubles with the dedicated GPU most of it was the switching logic not the GPU chip its self.

I don't like the copper shim approach as you'll then need to apply thermal paste on both mating surfaces. In this case I would go with the K5 viscous paste as that is Apple used in this series on the PCH chip originally.

I should say the pad also works! it's just tricky to gage the correct thickness. You want it snug not tight! Many of the issues with melted pads is people replaced them with the wrong thickness as the chip heats up the pad will expand which drives it to push harder against the chip and sink which then causes it to heat up more! A viscous cycle till the pad melts.

@skybar this is just a supplement. You are having this issue because of the actual chip design. Only seldom is it a failure of the solder balls which connect the IC BGA package to the motherboard. It does happen and you can see why (different device, same idea) on here More commonly however is that the failure is due to the chip design itself. 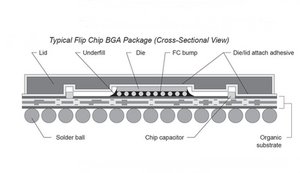 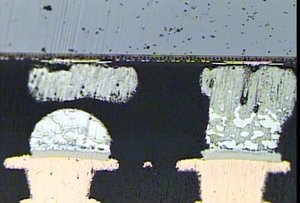 The chip has failed.

the baking of the board or a reflow/reball may only work for a bit. iFixit.org had a pretty good article written about the baking and additional copper shims on here.

Again, this is only a supplement to what experts like @mayer are already suggesting.

Thanks! I really dont know much about chip design so that was super helpful.

Yeah, I've heard that it doesn't usually last long but keeping it cool tends to help it last longer, so I plan on a stationary setup on a fan-cooled stand and hoping for the best. But like I said, it was pretty much this or the trash, as I don't have a lot of money and even if I did I don't know that it would be worth spending the money for a fix that is probably temporary. And in case you all couldn't tell I haven't done a whole lot with the inside of a laptop like this aside from replacing RAM and blowing out dust bunnies.

I was thinking about drilling a few tiny vent holes in the base between the fans - I've read in a few places that it has helped a ton, but then I'd have to worry about other areas getting hot as the intended air flow might go in all new directions... But that's another topic! :D Thanks again!

@skybar I totally agree with you. Use your oven before you use the trash bin. The only reason I would shy away from multiple shims between the processor and the heatsink is the air-gap between shims. If you could use a solid shim or apply thermal paste between the shims it may be more successful. Go for it. You got nothing to lose here!

@oldturkey03 - Don't forget about Tin whiskers! Thats the other issue with the BGA's with the older lead-free solder. The newer stuff seams to have reduced it. Crystallization is still a common failure.

I do agree with you on the internal GPU flip chip design flaw as a major failing! Gee, I would have hoped Apple would have learned from the A1150 design mess.

Arctic silver is too thin for the machines that have 2 chips on the same heatsink. Sure it will work but not that well. Use a thicker paste that will harden with use such as Arctic Alumia. It is ceramic based and does a very good job. The heatsinks that cover 2 chips (CPU and GPU) don't sit perfectly flat on the chips and need a thicker paste.

@tcrs_circuit - Tim, We had the same concerns early on, so we did a few experiments to see what the planer gap was between the heat sink pads as well as the chips them selves. We where surprised to see they are very close!

We used an optical bench and two laser beams to measure both and we tested three setups. A new system, one thats been in the field for a year and one that was to be junked as its GPU had failed (tested before & after reballing it). Only the chip we reballed had the greatest margin of difference. Even still it was within what I do with Arctic Silver paste.

@danj Good to know. Never really measured it just went off what some have said.