A1708 / EMC 2978 — Released October 2016, this entry-level MacBook Pro retains its traditional function keys (as opposed to the OLED Touch Bar). The function key version packs an Intel Core i5 and two Thunderbolt 3 ports. 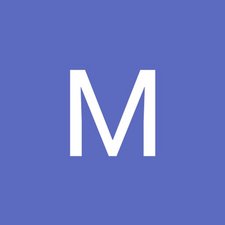 Is this damage bad?

My macboook pro stopped turning on Thursday. The reason why is that my power key (the right-most key on the upper row that turns on the macbook) is broken for 10 months. But during this period I was still able to turn on my macbook by just tapping repeatedly on the enter key. This was until thursday when my battery got damaged, so there is no charge in the macbook anymore. In this case I cannot turn it on by tapping multiple time on the enter key. I believe I would need the power key to be functional if I want to use my macbook while plugged in to power.

I decided to take my macbook to a repair shop hoping that the guy there might be able to find a way to make my macbook work while plugged to power (I don’t care if I can’t use it unplugged, most of the time I am using it plugged to power). The moment I hand him my macbook, I knew I have made a big mistake. The guy clearly has never opened a macbook in his life. When he wanted to remove the lower case, he removed the screws and instead of pulling the lower case towards the right as shown in this photo (red arrow), he wanted to forcibly remove it by putting a prying tool where the blue arrow is. 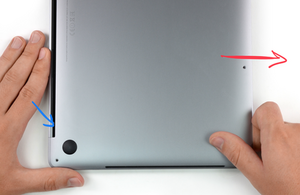 He told me the lower case is sticked with glue. Even I, a novice, knew there was no glue holding the case. I was trying to give him suggestions and tell him he just needed to pull it to the side, but he went and took off one of the black rubber feet of the macbook, because he thought that a screw was hidden beneath it. He didn’t find any screws and kept trying to forcefully open the lower case with his prying tool inserted where the blue arrow is. I could tell he has done significant damage to the inside of the macbook. Because he was applying so much force, and his hands were clumsy.

When he finally got it removed, (this was the first time my macbook pro was opened) I saw a lot of damage in this area in the antenna assembly. There was rubber coming off of the area (red) and metal was exposed and damaged. It was because of his prying tool. He lied to me and said it was glue. But I knew it was just rubber and damage he did himself. 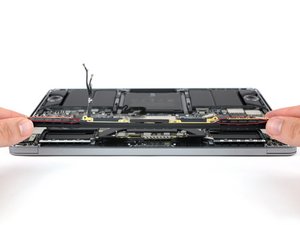 He continued to abuse my macbook, he even used a brush and scrapped hard to remove dust from the inside, he could have easily damaged many of the delicate black and thin connectors in the inside, because he was scrubbing like he wanted to remove a stain from a kitchen floor. After all this abuse (and after losing one screw, that he removed and couldn’t find anymore), he put the lower case back and I had to pay him 30€ for basically further damaging my macbook.

I should have known better, and opened my macbook myself. But I didn’t have my ifixit kit with me, so figured I can trust a professional. the only knew thing I learned by going to see him was that the middle battery was slightly swollen and probably dead, I could have done all of this myself without damaging anything inside.

I guess what I am trying to ask is how bad is it if the two wide metalic bars on either side of the antenna assembly were damaged ? (Literally all rubber came off and some of the metal was damaged around the red encircled area ). Am I going to lose wifi / bluetooth ?

Thank you and sorry for the long read.

While the vent cover & antenna bar is replaceable. Depending on how far forced his tools in other parts could be damaged!

Technically Apple has an extended warranty on keyboard issues which includes the power button too! So thats a free repair! Apple also has an extended warranty on the many of the Function keyed MacBook Pro systems as well! So both these issue could be free repairs! In many the Apple replaces the whole uppercase assembly so even if the battery was not covered it would end up being replaced anyways!

So before you can go to Apple to get this done you need to get the broken and damaged parts replaced. Are you upto fixing this so you can then get the rest of the system fixed? Otherwise Apple will void the repairs! Now think of the costs you could have saved new battery $150, New uppercase $360.

I would go back to this bozo and demand him to pay for the part! And he better not have charged you anything!

Consider sending this in to Apple for a “Flat Rate”, “Depot Repair”. Just tell them it won’t boot. They will probably list it as a tier 2 charge which runs about $550. The Flat Rate repair will replace any and all problems. They will probably replace the entire upper case including battery. Hopefully the damage done by your tech is not that noticeable.

In the USA the Phone number is 1-800-MYAPPLE. You may have to find a different number in your country on the Apple web site.