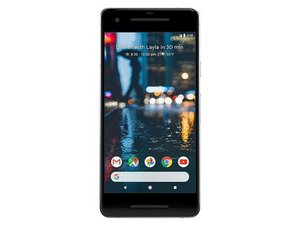 Why does my phone barely charge?

I purchased the Google Pixel 2 on August 15, 2018 - and after roughly 10 months of use, the phone started having difficulty charging. I figured it was the charging assembly in the phone as it seemed like I had to push the cable further and further into the phone in order for it to charge. After a few months of that, I looked at the cost of the tools and parts to fix it myself and found it too expensive at the time. So I tried ordering a new charging cable and a new charging adapter. The new adapter wasn’t a fast charging adapter but it worked a lot better than the fast charging one - but the new charging cable was no different.

And I stuck with that solution. A few months back it started getting harder to charge it again, but I was increasingly careful with not using much force or bending the cables, and it seemed to last. Until about a week ago, that is, when my setup started to suddenly take 24-60 hours to fully charge, from about 4 hours. I got a new adapter and cable under warranty, but they haven’t made any change, so this time I figure it really must be the charging assembly.

But before I order it, and the tools, I wanted to ask on here if one of you more experienced people think that my assessment is correct, and to ask for some recommendations to diagnose the problem further, if any.

I.e. should I just try to order the tools first, and then see if the charger is just misplaced within the phone or similar? To me, it does seem like it has been pushed further in that it should be.

So it turns out I’m just an ignorant fool. All it took was to deeply clean out the plug in the phone with a very thin pin or needle. I believe it’s called pocket lint, the fluff that was stuck deep in there. It’s working as brand new now, so I’m happy - but also quite embarrassed.

Electronics repair shops such as myself see issues like this all of the time. It's nice to see that a consumer not only figured out what was wrong, but also how to fix it. I'm certain if you went to your local carrier they would've said you must replace or send of the device for hundreds of dollars.

The most likely problem is probably a bad battery. This shouldn’t happen, as the phone is still quite new, so take it to google and ask about your warranty. If it is still in warranty they should repair it for free.

The bad battery will hold charge less, and take a lot longer to charge. This normally happens with old batteries, such as my old iPad 2, it takes a full 24 hours to charge now.

If it doesn’t seem to be a battery issue, then it would possibly be a bad dock connector.

Google should sort this.

Thanks you're right. My invoice says I have 2 years of warranty, so hopefully that'll pay off. Can't believe I didn't think of actually check up on that - I guess I was being a bit defeatist and misanthropic. I'll get back and accept the answer if they reply back.

Great! Glad I helped and I hope that the problem gets resolved soon.

@therepairer turns out I'm just an idiot. It was just compressed pocket lint stuck deep inside, preventing plugs from going all the way in.

Not to worry! I wouldn’t have entered my mind to check there so congrats