Internal SSD often not recognized, but working fine when recognized

I have a Macbook Air mid-2013 with a 256GB SSD drive. It was working fine, but one day after a long plane trip, I turned it on and it was showing the blinking folder icon with a question mark. I entered Recovery Mode and used diskutil to see that it plainly wasn't recognizing the main drive (it wasn't showing up at all). Resetting SMC and NVRAM didn't help.

After that, when I try to turn the computer on it mostly isn't working, but sometimes (like now) it works perfectly fine. I ran the bundled disk utilities and smartctl tests and everything comes out perfectly.

I took it to an official Apple store, who told me that the drive is broken and needs changing. That seems not to be the case, and I would not like to do that. A complete copy of the disk has been made, so I am not risking data loss (though I'd like to avoid having to format the drive). It would seem the disk is just fine, but the problem is somewhere else. I was suspecting that the SSD is loose or something like that.

What would you recommend? I was thinking of opening it up, cleaning it up, disconnecting and reconnecting the SSD drive, and hoping it would help. But before opening it up (something I have never done), I'd like to be sure I have exhausted all my options.

UPDATE: When I wrote the above the computer was working, I left it sitting for a while so it went to sleep, and when I tried to wake it up it wouldn't load anymore. I rebooted it and the folder with the question mark appeared again. 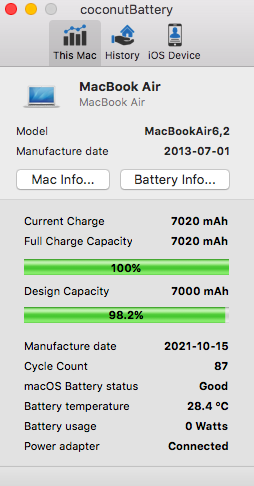 At some point did someone remove the drive or replace it? Sometimes I've encountered damaged sockets for people swapping out the drive. It's also possible the finger contacts are dirty and need a bit of cleaning.

Follow this guide to Step 3 and take a picture of the socket at an angle similar to Step3 image but closer MacBook Air 13" Mid 2013 Solid-State Drive Replacement Then, Take the drive out sliding it out before lifting take a picture of both sides and post it here fo us to see Adding images to an existing question

Well, I had the battery changed 10 months ago, and that's the only time somebody opened this macbook.

I'll come back to this problem, but for the moment my macbook has been running non-stop for almost 24 hours now so I'd rather not mess with it. It's plugged and I prevented it from going to sleep, it seems to be the key point. Last time it was working (and plugged, just in case), the moment I left it go to sleep, it wouldn't wake up... I find this quite puzzling.

Could it be something other than the SSD?

@cachamotle - Lets get a snapshot of CoconutBattery so we can check that battery. Click on the Blue link I posted above. Your issue could be a bad battery.

OK, I installed an older version of CoconutBattery which is compatible with 10.11. I attached it to the main post.

Good news! Your battery looks good! So we do need to focus in on the logic board again.

Good! I'm still using it without any problems. Not letting it go to sleep. I've unplugged it and used it for a while on the battery, and there was no problem.