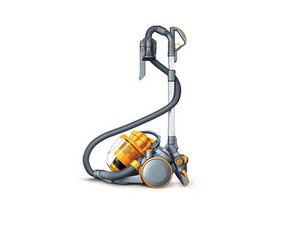 Repair guides and support for vacuums by Dyson, including upright, canister, and handheld vacuums.

Dyson is a household appliance company headquartered in Wiltshire, England. Dyson Appliances was officially created in 1991 by James Dyson, but Dyson vacuums originated earlier. Between 1979 and 1984, James Dyson developed over 5,000 vacuum prototypes that applied cyclone vacuuming systems to household vacuum cleaners. In 1991, one of Dyson’s early vacuums, the G-Force, won the International Design Fair prize in Japan.

In addition to Dyson cyclone technology, another signature Dyson vacuum feature is a transparent dust container. Even though research seemed to indicate that consumers wouldn’t want this, Dyson proceeded to introduce a transparent vacuum canister. It turned out to be wildly successful. Dyson’s DC01 became the most popular vacuum cleaner in the UK after only 18 months. By 2001, the DC01 comprised 47% of the market for upright vacuum cleaners.

Dyson vacuums come in a variety of forms. They are either stick vacuums, handheld vacuums, canister vacuums, upright vacuums, or robot vacuums. Dyson vacuums have the Dyson logo printed somewhere on their exterior.