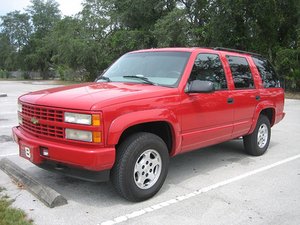 The name Tahoe didn't actually appear on any Chevy models until 1995. From 1992-1994, the Chevrolet-labeled sibling to the GMC Yukon was called the Blazer. Both models gained a 4-door version in 1995, when the Blazer nameplate was dropped, in favor of Tahoe. The Yukon and Blazer/Tahoe used the same GMT400 platform as the larger Suburban, but were considerably smaller, especially the 2-door models.